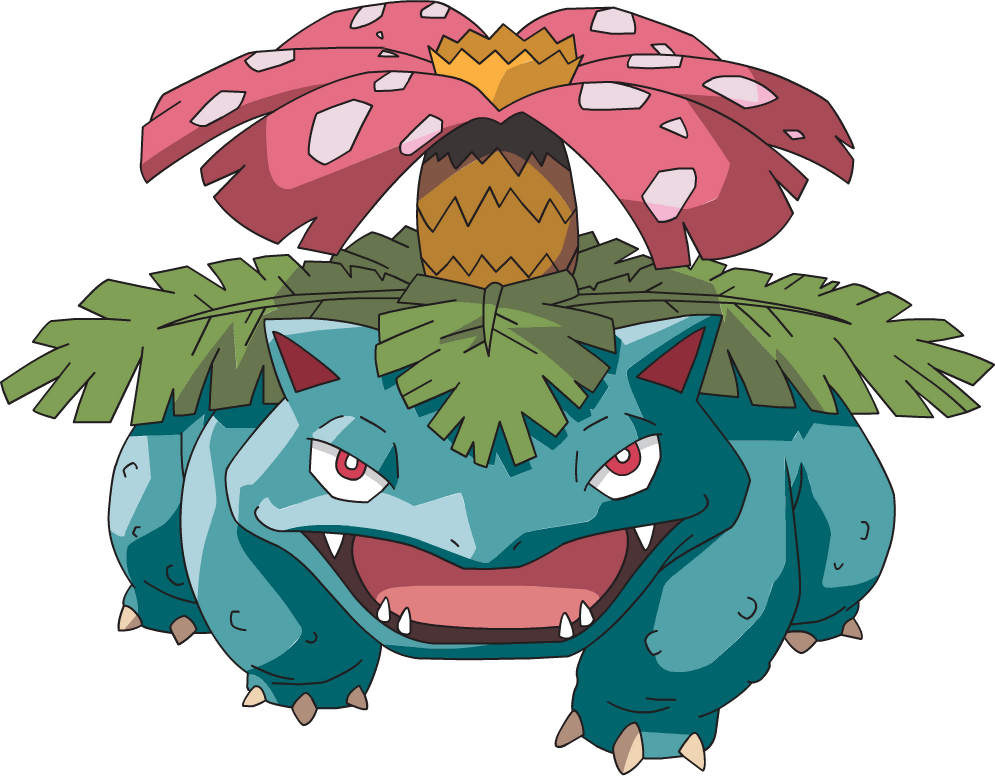 Venusaur (ヴィーナゾァ, Vīnasō) is a dual Grass/Poison-type Seed Pokémon that is known to be the evolved form of Ivysaur when leveled up up at level 32. It is also the final evolved form of Bulbasaur.

Venasaur is a squat, quadruped Pokémon with bumpy, bluish green skin. It has small, circular red eyes, two pointed teeth on its upper jaw, and four pointed teeth on its lower jaw. It has three clawed toes on each foot. The bud on its back has bloomed in a large pink, white-spotted flower. The flower is supported by a thick, brown trunk surrounded by green fronds. Its height is 7'10" and weight is 220.5 lbs.

A female Venusaur will have a seed in the center of its flower.

Venusaur uses its flower to catch the sun's rays to convert them into energy, which causes the flower to take on colors that are more vibrant. The flower releases a soothing scent that attracts Pokémon. This scent becomes stronger after a rainy day.

In the anime, Venusaur has demonstrated the ability to manipulate nature and lead evolution ceremonies for Bulbasaur and Ivysaur. This Pokémon is rarely found in the wild, but has been known to inhabit grasslands.

May's Bulbasaur had evolved during her absence from the series and showed up in Pruning a Passel of Pals! as a Venusaur.

Spenser's Venusaur debuted in Cutting the Ties that Bind. Spenser had Venusaur use Sweet Scent to drive away the furious Beedrill. Venusaur was the second Pokémon that the Palace Maven used in his battle with Ash in Ka Boom with a View!. The Seed Pokémon won against Ash's Heracross, but lost to his Swellow. It made another appearance in a flashback in King and Queen for a Day!.

A Venusaur leading an evolution ceremony for Bulbasaur appeared in Bulbasaur's Mysterious Garden.

A Venusaur nicknamed Bruteroot was under the ownership of a Trainer named Corey in Mewtwo Strikes Back. Like Corey's other Pokémon, it was cloned by Mewtwo. Its clone made another appearance in Mewtwo Returns.

Orange League of the Orange Islands used a Venusaur in his battle against Ash and his Tauros in Enter The Dragonite.

An artist has a Venusaur as a long-time friend, which he used to battle Team Rocket to blast off in The Light Fantastic.

When the Team Rocket Gang was working at the Battle Park in One Trick Phony!, James used a Venusaur in a battle against Ash's Cyndaquil as part of an elaborate plan to capture Ash's Pikachu.

In Grass Hysteria!, May got lost in the Forbidden Forest, which was ruled by a Venusaur.

Jeremy used a Venusaur that knew Frenzy Plant in the second half of the Silver Town Pokémon Contest in Weekend Warrior. Jeremy's Venusaur came very close to defeating May's Combusken, but the Young Fowl Pokémon came through and pulled off a come-from-behind victory.

A giant robot Venusaur was at the amusement park in Island of the Giant Pokémon.

In The Ghost of Maiden's Peak, a Gastly created an illusion of Venusaur in order to frighten Ash's Bulbasaur. Gastly subsequently combined this Venusaur with an illusionary Blastoise to create a Venustoise, which terrified both Squirtle and Bulbasaur out of battling.

The first time a real Venusaur made an appearance was a cameo in March of the Exeggutor Squad.

A Venusaur was one of the Pokémon seen in a field of flowers in Houndoom's Special Delivery. It tried to use Sleep Powder on Misty's Togepi, but Houndoom blocked the attack, causing itself to fall asleep.

A Venusaur was seen in a Pokémon Center in Moving Pictures.

Two Venusaur appeared in the intro of Destiny Deoxys.

As seen in Numero Uno Articuno, one of the Pokémon Noland offers for challengers to battle is a Venusaur. However, Ash instead chose to battle Articuno.

A Venusaur appeared in May, We Harley Drew'd Ya!.

A Venusaur appeared in the opening scenes of Zoroark: Master of Illusions.

A Venusaur appeared in Alexa's magazine in The Journalist from Another Region!.

Venusaur also appeared in The Power of One.

A Venusaur was seen in a Gym on Kumquat Island in Pokémon Double Trouble. However, this scene was removed from the dub due to the appearance of Jynx.

Venusaur, Seed Pokémon. The evolved form of Ivysaur and final evolved form of Bulbasaur. Venusaur uses its large petals to soak up the sun's rays and capture sunlight and transform it into energy while using whatever remains as a source of energy.

Community content is available under CC-BY-SA unless otherwise noted.
Advertisement